E3 2014 played host to a number of new-gen games waiting to impress the world of interactive entertainment but none more spellbinding than CD PROJEKT RED’s graphically-striking and highly anticipated RPG, The Witcher 3: Wild Hunt.

In a twist to the third and final instalment of the story, Bandai Namco Games can reveal that both Amazon UK and GAME have helped make impressive starts to pre-order sales of the Collector’s Edition on all formats including Xbox One, PS4 and PC ahead of the global launch on February 24th, 2015. A start that will likely upset a number of fans who’ll be set to miss out on Collector’s Editions once the limited amount have been snapped up.

We  always expected a good response for such an amazing game but the fact that the Collector’s Edition is in such high demand shows the accreditation that The Witcher 3: Wild Hunt deserves. E3 was yet another great example of how CD PROJEKT RED hold nothing back when it comes to quality. We want fans and newcomers to get as much out of The Witcher 3: Wild Hunt as possible and be part of the history that this title has already made, and that this small souvenir represents, for the future of our industry. It’s important that fans looking forward to this epic release take advantage of the incredible collector’s edition on PC, PS4 and Xbox One and the outstanding additional content that will feature in the standard edition of the game too which includes, the soundtrack, the game,  game map, stickers and Witcher universe compendium with no additional cost.

The Witcher 3: Wild Hunt has now received just shy of 130 awards and in an open letter thanking the community and the fans, CD PROJEKT RED said more in one picture than could ever be said in one thousand words… Literally. 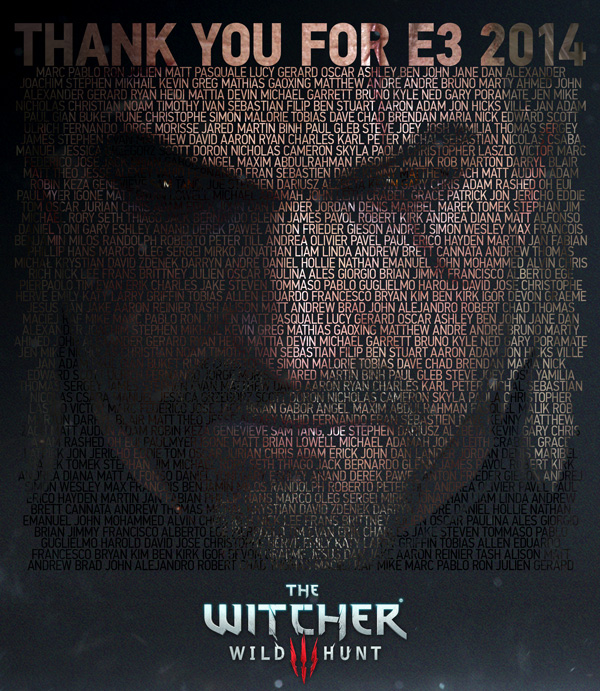 The 1,000 names that make up a photo of Geralt’s face thanking those who visited CD PROJEKT RED at E3 this year.

A limited number of Collector’s Editions for PC, PS4 and Xbox One are still available at https://buy.thewitcher.com

UK fans of The Witcher 3: Wild Hunt set to miss out on Collector’s Editions was last modified: June 30th, 2014 by Shak
Related

The Stray Cat Without Fur is as Horrific as You Expect

Should Naughty Dog Reskin with HBO Actors for The Last of Us Remake?